WHEN AN INVESTOR’S ACTIONS THREATEN AN ENTIRE BRAND, SOULCYCLE CEO GETS IT RIGHT

One of my favorite workout experiences occurs when I’m in New York City on business: SoulCycle. I’ll never forget the first time I tried it: I’m not overstating the impact when I say it was a true out-of-body experience. So while I’ve settled for my Peloton in lieu of a SoulCycle Pittsburgh location, my fangirl interest was piqued when the “passive investor” crisis shocked the Soul community.

I saw the news break in a terse post on Chrissy Teigen’s Instagram feed: “cancel your SoulCycle and Equinox memberships.” For those unaware, the controversy occurred when billionaire Stephen Ross, chairman of SoulCycle parent company Equinox, hosted a big-ticket fundraiser for President Trump at his home in the Hamptons.

For SoulCycle CEO Melanie Whelan, it was an instant communications crisis. Without Ross’ investment, Soul wouldn’t be the company it is today, with hundreds of studios nationwide. Melanie would have a lot less money. Fewer people would have access to this inspiring — and for some, life-changing — workout. Yet their loyal followers felt deceived, robbed, and cheated.

On one hand, entrepreneurs scaling a business aren’t likely to ask investors about their political leanings before accepting money. At the same time, President Trump is an epically divisive figure, pitting Americans against each other at levels unprecedented in recent history. I could pontificate more, but I’m writing for a reason: The way Ms. Whelan and the executives at Soul handled this crisis from a communications perspective was really good — so good, in fact, that it may one day serve as a case study in best practice for crisis communications.

Here are three things the company did to protect its brand:

1.) Rapid Response: Within hours, Soul’s CEO issued a strong and clear statement via Instagram. The statement stayed on brand by being aspirational in tone and avoided negativity to the best extent possible (the president’s name wasn’t mentioned). At the same time, the statement answered questions to stave off rumors: Do you support this event? Do you support President Trump? How could this happen? Who is Mr. Ross? 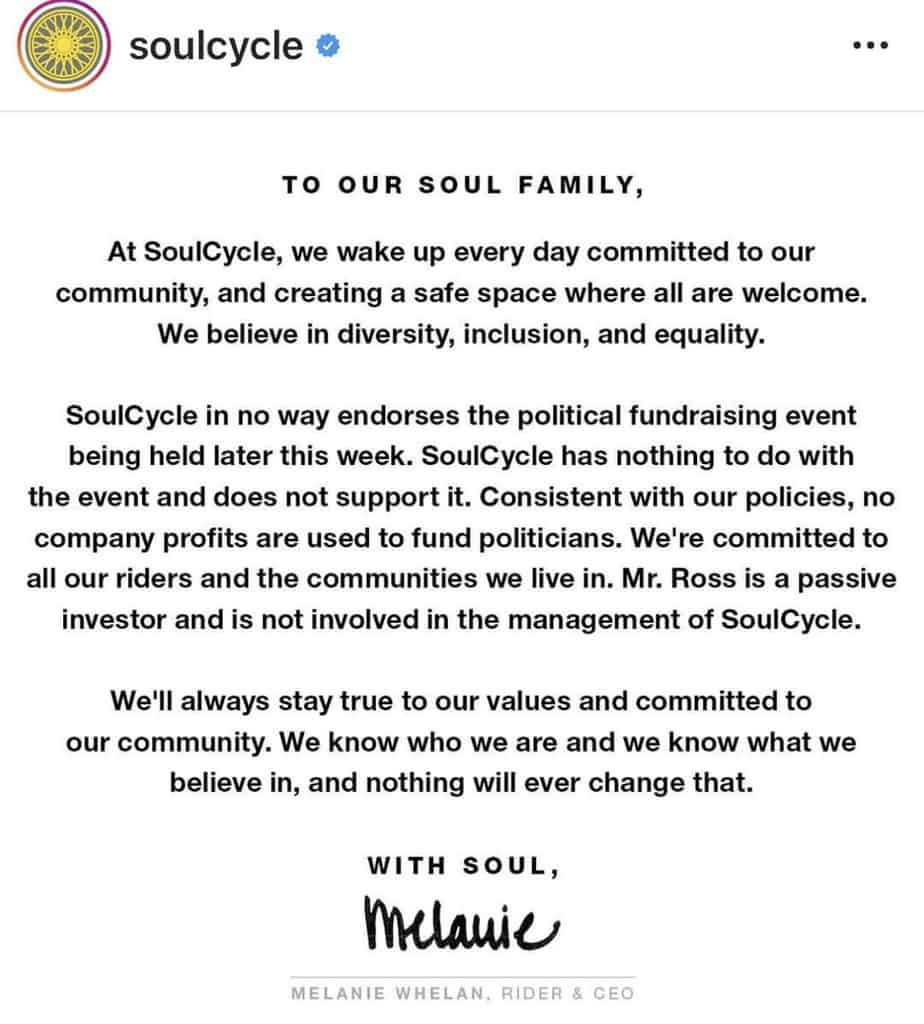 2.) Authentic Communications: Acknowledging shortcomings in a brand, especially a lifestyle company, is essential. Soul’s CEO used Instagram stories in the following days to answer top questions from the community and then posted them for all to see. In her video, she communicated that she is always listening, and her body language was the epitome of an authentic communicator: she leaned in and her nonverbals (what audiences truly absorb) were believable. The company answered the tough questions, too, like: “What is a passive investor, anyhow?”

3.) Activation of Message Carriers: And for the grand finale, SoulCycle activated its community of all-star instructors, some of whom carry Instagram followings in the tens of thousands. They empowered each instructor to hold his/her own community ride, donating all profits to the nonprofit of their choice. 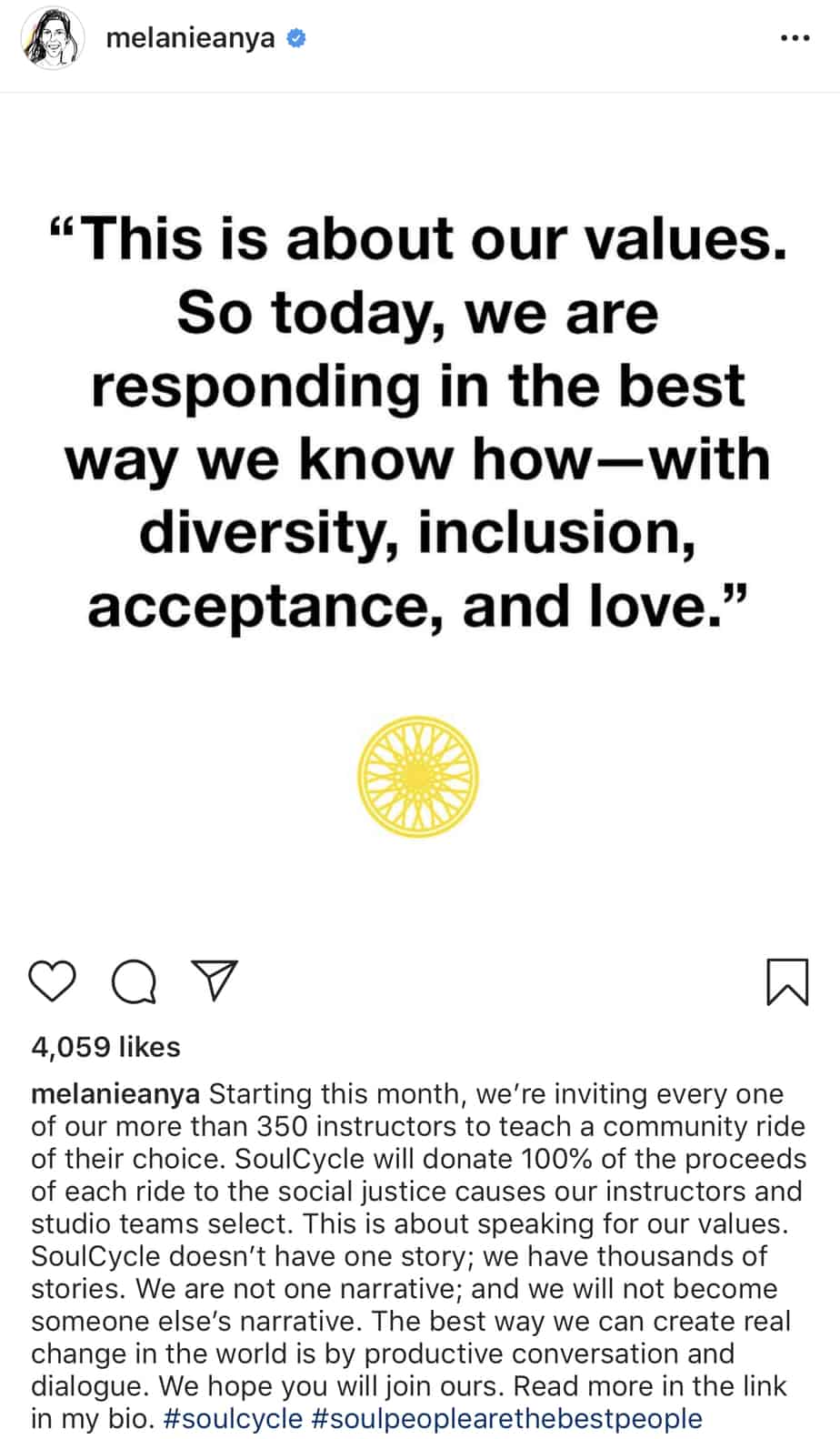 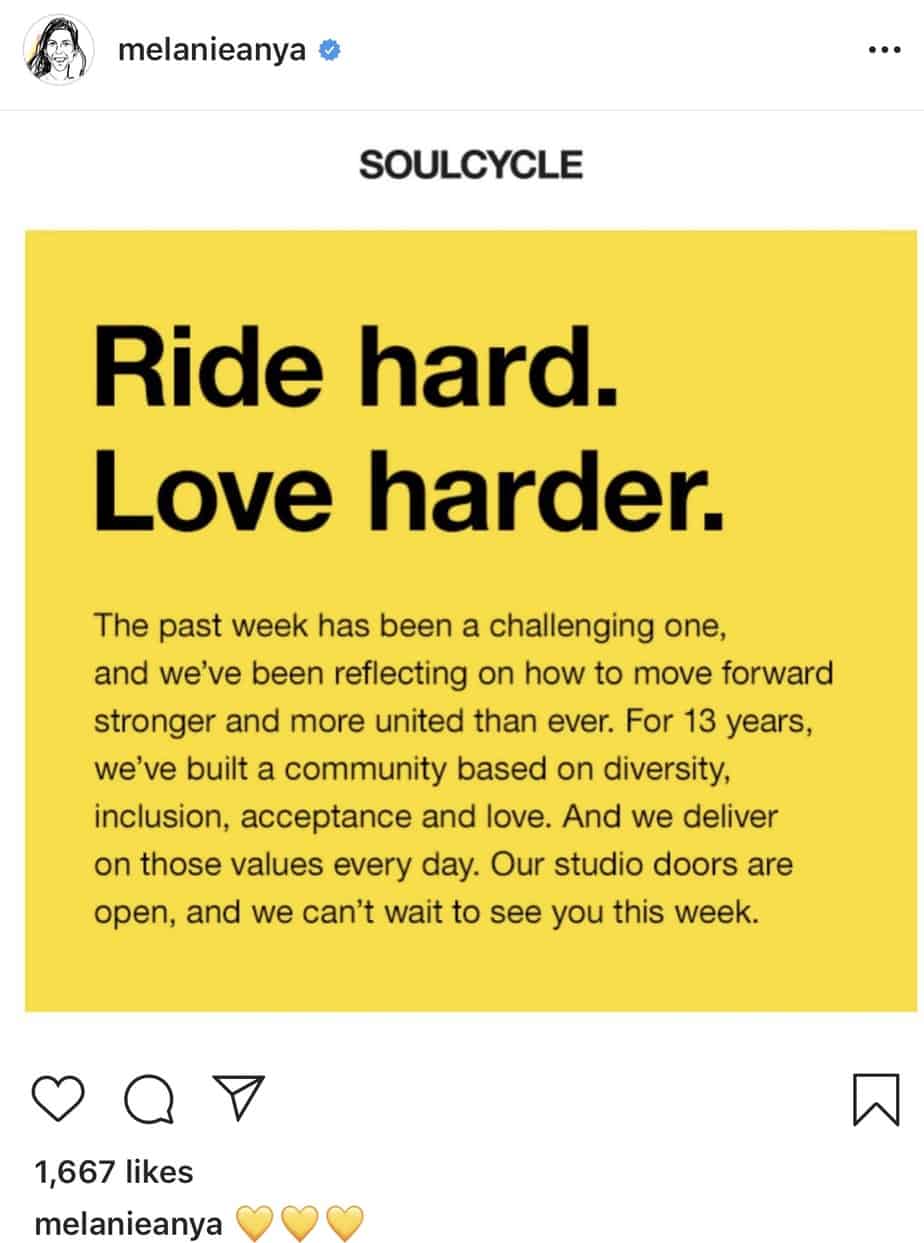 Increasingly, brands are distinguishing themselves by selling a dream, a lifestyle, or an aspiration vs. a product or commodity. And these brands will increasingly be under fire as cynics look for the next hypocrite corporation to sink their teeth into. Consequently, crisis communications for these brands should be just as important as the intentional branding that goes into their everyday marketing. For SoulCycle, they happen to soon be launching an at-home bike and digital workout platform to rival Peloton’s market foothold. So how could this communications fiasco impact their bottom line? It seems as though they are wisely testing its impact as they teased out information last week. Certainly a lot of eyes went to the marketing content, but will the boycott impact conversions upon launch? Time will tell.

Joanna Doven is the CEO of Premo Consultants. You can contact her by email at [email protected]. 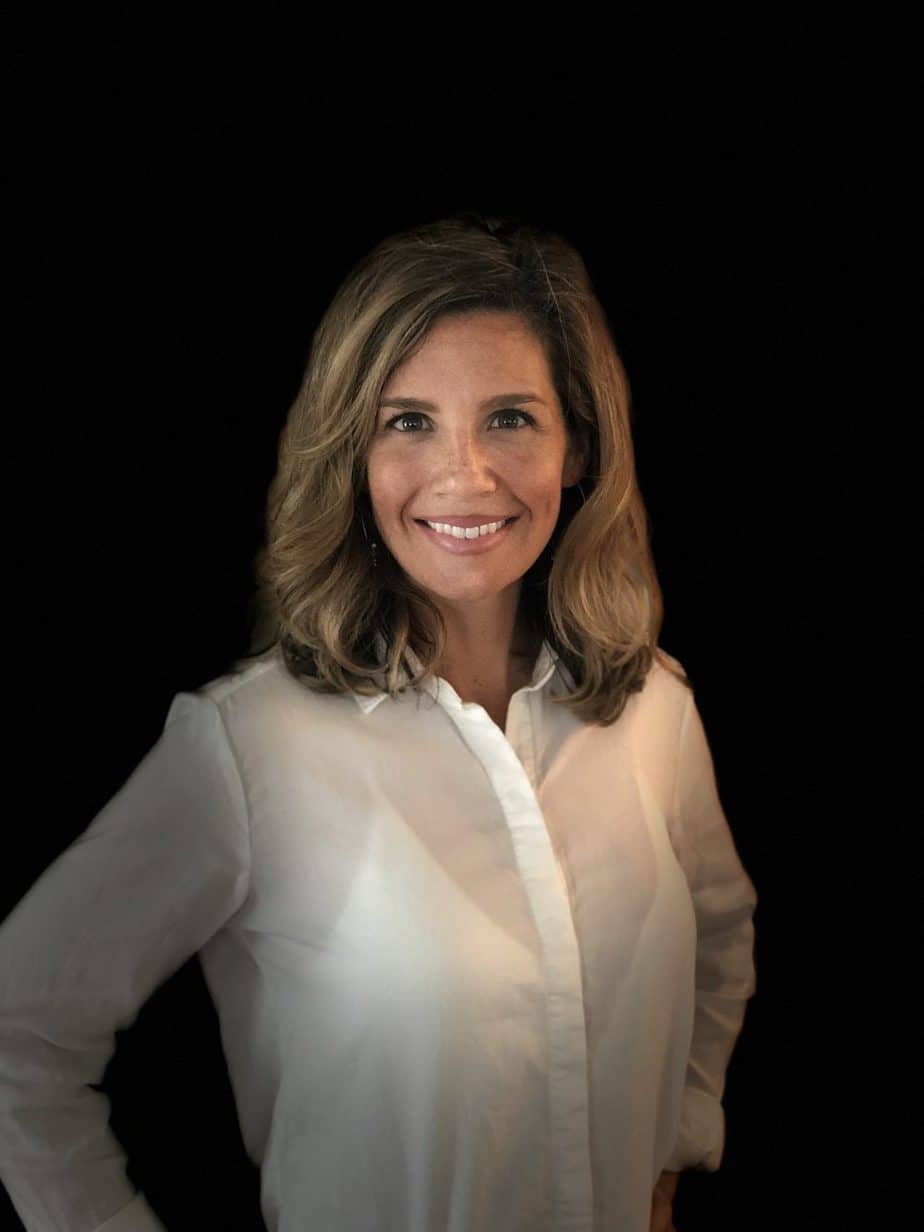 Do’s and Don’ts of Crisis Communications and Incident Response

For most it’s not if, but when you will face a crisis. Premo can help you to have a strong, preventative crisis communications plan in place in order to mitigate the effects of any crisis your organization may face.

END_OF_DOCUMENT_TOKEN_TO_BE_REPLACED

Telling Your Company’s Story: Premo Gets Clients Noticed During The Covid-19 Crisis

In the first 30 days of COVID-19, when Americans were glued to the news, our team secured national media placements for multiple clients, including a molecular diagnostics facility, a global CO2 extraction company, and more.

END_OF_DOCUMENT_TOKEN_TO_BE_REPLACED

Educating During the COVID-19 Crisis: An Interview with One of the Nation’s Top Educational Solicitors, Ira Weiss

We talk to Ira Weiss about the sometimes inconsistent flow of information and overcoming the resource gap within the student population of these educational institutions. Will kids be able to back to school? And if so, when?